The Wonder Years is an American pop punk band from Lansdale, Pennsylvania that formed in July 2005. Since their conception, they have released five full-length albums, two EPs, and several splits/compilations. The group is currently signed to Hopeless Records.[1]Their name originates from a paper that lead vocalist, Dan ‘Soupy’ Campbell, read that was written by one of his after-school educators titled “The Wonder Years.

The Wonder Years were born in 2005 out of the remnants of an old Lansdale, PA band called The Premier. The Premier consisted of Dan “Soupy” Campbell, Matt Brasch, Nick Steinborn, Matt Hittinger, Dave and CJ Morgan. Dave, CJ, and Matt Hittinger didn’t join The Wonder Years. Their first practice was in Mike Kennedy’s basement on July 5, 2005. On that day they wrote their first song, “Buzz Aldrin: The Poster Boy for Second Place”.

In their first two years, two relatively unknown split EPs with other local bands were released. Their first (with Emergency and I) was released in 2005, featuring three songs. Two of those were later re-recorded on their first full-length album Get Stoked on It!. (“I Fell in Love with a Ninja Master” and “Buzz Aldrin: The Poster Boy for Second Place”). The other song on the split was “Cowboy Killers”.

The Wonder Years quickly followed their first split EP with another, this time with the band Bangarang!. This second release also featured two songs that would be re-recorded for Get Stoked on It!. (“My Geraldine Lies Over the Delaware” and “Let’s Moshercise!”). The other two songs were “I Ain’t Sayin’ He a Gold Digga (Sike!)” and “Through Two Hearts”.

Main article: Get Stoked on It! 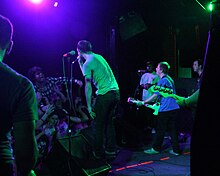 The Wonder Years Performing live in 2009

The Wonder Years’ second full-length album, The Upsides, was released on January 26, 2010. The Upsides sold 1852 units in its first week, landing it on multiple Billboard charts: No. 5 on Alternative Artist, No. 9 on Top New Artist, No. 26 on Top Internet Album, and No. 43 on Indie Label Album.[3]

Also with the release of The Upsides was a 7″ limited to only 500 copies and available with pre-order of The Upsides CD. This vinyl features a non-album song entitled “Leavenhouse. 11:30.”, which is about the early years of music for The Wonder Years and their local scene in Lansdale, PA. The title “Leavenhouse” refers to a house in which members of the Lansdale band Leavenworth lived and hung out at day or night.

A few months after the release of The Upsides, on May 27, The Wonder Years announced that they had signed to Hopeless Records. Their first release after their signing was a split 7″ with Fallen from the Sky, on which they covered “Zip Lock” by Lit.

The Wonder Years released a deluxe edition of The Upsides on September 21, 2010. It included 4 new songs titled, “I Was Scared & I’m Sorry”, “We Won’t Bury You”, “Dynamite Shovel (campfire version)”, and “Logan Circle: A New Hope”. “We Won’t Bury You” was written about best friend Mike Pelone who was also in the band Emergency and I. Mike Pelone died in August 2010.

In October 2010, The Wonder Years released a music video for the song “Melrose Diner” set to the theme of BAW Wrestling and starring actor Charlie Saxton as the wrestler “Lone Wolf”.[4]

Main article: Suburbia I’ve Given You All and Now I’m Nothing

In the fall of 2010, The Wonder Years confirmed that they were writing the follow up to The Upsides. On June 14, 2011 The Wonder Years released Suburbia I’ve Given You All and Now I’m Nothing on Hopeless Records. “Suburbia” is inspired by the poem America by Allen Ginsberg as well as the band’s life following the release of The Upsides. The first single off the album titled “Local Man Ruins Everything” was released on April 12, 2011 on iTunes. The second single, “Don’t Let Me Cave In”, was released on iTunes and Amazon on May 3, 2011, along with a music video. The third single, “Coffee Eyes” was made available for streaming on the Alternative Press website on June 1, 2011. The record charted at number 73 on the Billboard Top 200 the week of its release, selling 8,100 copies. On August 11, 2011 they released a music video for “Local Man Ruins Everything”. The video consists of Hank the Pigeon “adventuring on his own” around Lansdale and Philadelphia.

The band released a split 6-inch with Stay Ahead of the Weather entitled Punk Is Dead. Get a Job. on April 17, 2012 and re-released their debut full-length, Get Stoked on It!, on May 15, 2012. The album will only be available digitally through the record label’s website. Campbell, who has been outspoken about his disappointment in the band’s first album, said, “In our opinion, this record is a trainwreck. Chris paid to get it remastered forever ago and we kept trying to put off its inevitable re-release. He and I agreed that since it’s already available digitally, that no real harm can come of swapping out the old mixes with the better sounding ones as long as it never gets pressed in a physical form again. That’s the long and short of it. If you like the record, enjoy the new mixes. If you hate the record, I’m on your side. We won’t be playing any of these songs live in support of this. We don’t even consider it a re-release. Just a swap out for a better mix.”[5]

On December 3, the band announced on their official Twitter and website that they will be releasing a compilation of all of their former EPs and splits titled “Sleeping on Trash”, which was released on February 12. They also announced that they were done writing their new album and would be entering the studio in January.

Prior to the release of The Greatest Generation the band played 4 shows in the span of 24 hours to promote the album. The Wonder Years released their fourth LP, The Greatest Generation, on May 14, via Hopeless Records. In May 2013, The Wonder Years played all 6 dates of Slam Dunk festival in the UK and Ireland. Before embarking on the Vans Warped Tour 2013, the band played some shows with Silverstein in Canada. First week sales of The Greatest Generation more than doubled the sales of Suburbia I’ve Given You All and Now I’m Nothing, with a total of 19,673 copies sold. These sales placed the album at #20 on Billboard’s Top 200 chart. In February 2015 over the course of three days, the band played anniversary shows where each night they played one of their three previous albums in full.[6]

Main article: No Closer to Heaven

On April 20, 2015 the band announced they were finished recording their fifth studio album. On June 29, the band announced No Closer to Heaven was set for release on September 4.[7] On June 30, the band released the music video off the new record, entitled “Cardinals”.[8] On the band’s website, buyers of the pre-orders are greeted with the option to donate to one of four charities, which include Puppies Behind Bars, After-School All-Stars, The Herren Project and Futures Without Violence.[9] A music video for “Cigarettes & Saints” was released on July 31. On August 20, “I Don’t Like Who I Was Then” was made available for streaming via Alternative Press. The album features Letlive‘s frontman Jason Aalon Butler on the track “Stained Glass Ceilings.” The song’s music video premiered on the band’s YouTube channel on March 2, 2016.[10] The band alluded to the start of work on a new album on New Year’s Day of 2017 via twitter. The album has not been officially confirmed, and no release date or album title were disclosed. The band later elaborated on this announcement on April 27th of the same year, stating that two releases were on the way. On July 27th, 2017, an acoustic EP, entitled Burst & Decay was revealed with a release date of September 22nd, 2017. The EP features seven acoustic versions of songs off of either “Suburbia”, “The Greatest Generation”, or “No Closer to Heaven”. It was also confirmed that their next LP was finished being written and would be recorded as soon as the band returned home from tour.

On December 22, 2017, the band’s social media accounts began to feature a black banner with the text, “SEE YOU IN 2018”, and a link to their website. In addition, the band posted in regards to upcoming material, “Turning the lights out for a bit. New record next year. If you want to be kept informed go here: hopelessrecords.com/thewonderyears. For now, we rest.”[11]

Campbell, in a Let’s Play with Achievement Hunter said that Motion City Soundtrack were “a huge influence” for the band.[22]

Rock Sound wrote that on The Upsides Campbell sung about “His early twenties soul-searching and tales of strife” which “resonated with a [new] generation, inspiring countless imitators in the process.”[23] This pushed Campbell to “the forefront of a new wave”, and the album influencing a new wave of pop punk bands.[23] The Wonder Years have been listed as a big influence for British band As It Is.[24]

In May 2014, Campbell announced a solo project, Aaron West and the Roaring Twenties.[27] With this project, Campbell pushed himself “to make a piece of fiction feel just as raw and personal as songs about my life”.[27] An album, We Don’t Have Each Other, was released in July.[28] Campbell performed on a few dates of the 2014 edition of Warped Tour.